Analysis And Elimination Of Common Faults Of Diesel Engine Turbocharger

Abstract: Turbocharger is the most important and one of the most effective ways to improve diesel engine power. As the boost pressure increases, the power of the diesel engine increases proportionally. Therefore, once the turbocharger works abnormally or fails, it will have a great impact on the performance of the diesel engine. According to investigations, it has been found that turbocharger failures are among diesel engine failures in recent years It accounts for a large proportion. There is a gradual increase. Among them, pressure drop, surge, and oil leakage are the most common, and they are also very harmful. This article focuses on the working principle of the diesel engine supercharger, the use of the supercharger for maintenance, and the judgment of the failure, and then analyzes the theoretical reasons of the supercharger failure in depth, and gives some factors caused in the actual situation and the corresponding troubleshooting methods. 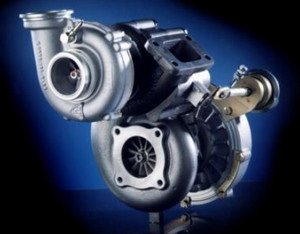 Supercharger using exhaust energy of the engine is negative, the drive rotation of the turbine to drive compressor impeller rotates at high speed coaxial and accelerated by the pressure guard protecting the compressor housing and compressor air to the engine The cylinder increases the charge of the cylinder to increase the power of the engine.

Second, the use and maintenance of the turbocharger

Supercharger operating at a high speed, high temperature, turbine inlet temperature can reach 650 ℃, special attention should be used to do maintenance work.

1. For newly activated or repaired turbochargers, use hands to toggle the rotor before installation to check the rotation of the rotor. Under normal circumstances, the rotor should rotate briskly and flexibly, without jamming or abnormal noise. Check the intake pipe of the compressor and whether there is any debris in the exhaust pipe of the engine. If there is debris, it must be thoroughly cleaned. Check whether the lubricating oil has become dirty or deteriorated and must be replaced with new lubricating oil. While replacing the new lubricating oil, check the lubricating oil filter, clean or replace the new filter element. After replacing or cleaning the filter element, the filter should be filled with clean lubricating oil. Check the oil inlet and return pipes of the turbocharger. There should be no distortion, flattening, or blockage.
2. The supercharger must be installed correctly, and the connection between the inlet and exhaust pipes and the supercharger bracket should be strictly sealed. Due to the thermal expansion when the exhaust pipe works, the common joints are connected by bellows.
3. The lubricating oil engine supply of the supercharger, pay attention to connecting the lubricating pipeline to keep the lubricating oil path unblocked. The oil pressure is maintained at 200-400 kPa during normal operation. When the engine is idling, the oil inlet pressure of the turbocharger should not be lower than 80 kPa.
4. Press the cooling pipeline to keep the cooling water clean and unobstructed.
5. Connect the air filter and keep it clean. The unobstructed intake pressure drop should not exceed 500 mm mercury column, because excessive pressure drop will cause oil leakage in the turbocharger.
6. According to the exhaust pipe, external exhaust pipe and muffler, the common structure should meet the specified requirements.
7. Turbine inlet exhaust gas should not exceed 650 degrees Celsius. If the exhaust gas temperature is found to be too high and the volute appears red, stop immediately to find the cause.
8. After the engine is started, pay attention to the pressure at the inlet of the turbocharger. There must be a pressure display within 3 seconds, otherwise the turbocharger will burn out due to lack of lubrication. After the engine is started, it should be run without load to keep the lubricating oil pressure and temperature. It can be operated with load only after it is basically normal. When the temperature is low, the idling time should be appropriately extended.
9. Check and eliminate the abnormal sound and vibration of the supercharger at any time. Observe the pressure and temperature of the lubricating oil of the turbocharger at any time. The turbine inlet temperature shall not exceed the specified requirements. If any abnormality is found, the machine should be shut down to find out the cause and eliminate it.
10. When the engine is at high speed and full load, it is strictly prohibited to stop it immediately unless there is an emergency. The speed should be gradually reduced to remove the load. Then stop without load for 5 minutes to prevent damage to the turbocharger due to overheating and lack of oil.
11. Check whether the inlet and outlet pipelines of the compressor are intact. If there is rupture and air leakage, remove it in time. Because if the compressor inlet pipe is broken. Air will enter the compressor from the rupture. The debris will cause damage to the compressor wheel, and the compressor outlet pipe ruptures and leaks, which will cause insufficient air entering the engine cylinder, resulting in deterioration of combustion.
12. Check whether the inlet and outlet oil pipelines of the turbocharger are intact, and remove any leaks in time.
13. Check the fastening bolts and nuts of the turbocharger. If the bolts move, the turbocharger will be damaged due to vibration. At the same time, the speed of the turbocharger will decrease due to the leakage of the gas pool, resulting in insufficient air supply.

Third, the analysis and troubleshooting methods of common faults of the turbocharger

1. The turbocharger is not flexible in rotation.

SYMPTOM. When the temperature of the diesel engine is low, the exhaust pipe emits white smoke, and when the engine temperature is high, the exhaust pipe emits black smoke, and part of the smoke radiates and drifts around, and part of the smoke is concentrated and discharged higher.
INSPECTION. When the diesel engine is stopped, listen to the inertial rotation time of the supercharger rotor with the monitoring stick, and the normal rotor can continue to rotate by itself for about one minute. Through monitoring, it was found that the rear turbocharger only turned on its own for a few seconds and then stopped. After removing the rear turbocharger, it was found that there was a thick carbon deposit in the turbine and the volute.
ANALYSIS. The inflexible rotation of the turbocharger results in a row of cylinders with reduced air intake and a lower compression ratio. When the engine temperature is low, the fuel in the cylinder cannot be completely ignited, and a part of it is discharged as fog, and the combustion is incomplete when the engine temperature increases. Exhaust black smoke, because only one turbocharger is faulty, the air intake of the two cylinders is obviously different, resulting in a situation where the exhaust smoke is partly dispersed and partly concentrated. There are two aspects to the formation of coke deposits: one is the oil leakage of the turbocharger , The second is the incomplete combustion of diesel in the cylinder.
EXCLUDE. First remove the carbon deposits, and then replace the turbocharger oil seals. At the same time, attention should be paid to the maintenance and adjustment of the diesel engine, such as adjusting the valve clearance on time, cleaning the air filter in time, and correcting the injectors to reduce the formation of carbon deposits.

2. The turbocharger oil, channeling oil into the airway

SYMPTOMS. When the diesel engine burns normally, it can be seen that the exhaust pipe emits uniform and continuous blue smoke. In the case of abnormal combustion, it is difficult to see the blue smoke due to the interference of white smoke or black smoke.
INSPECTION. Disassemble the end cover of the intake pipe of the diesel engine, it can be seen that there is a small amount of oil in the intake pipe. After removing the supercharger, it is found that the oil seal is worn.
ANALYSIS. The air filter is seriously blocked, the pressure drop at the compressor inlet is too large, the elastic force of the compressor end seal oil ring is too small or the axial gap is too large, the installation position is incorrect, and it loses its tightness, and the compressor end is sealed. The air hole is blocked, and the compressed air cannot enter the back of the compressor impeller.
EXCLUDE. It is found that the turbocharger is leaking oil, the oil seal must be replaced in time, and the air filter must be cleaned in time if necessary, and the air hole must be cleared.

cause of the malfunction
1. The air filter and the air intake are blocked, and the air intake resistance is large.
2. The compressor flow path is fouled, and the diesel engine intake pipe is leaking.
3. The exhaust pipe of the diesel engine is leaking, and the turbine airway is blocked, which increases the exhaust back pressure and reduces the working efficiency of the turbine.

Causes of failure
1. The air intake passage is blocked, which reduces the blocked air intake flow.
2. The exhaust gas passage, including the nozzle ring of the turbine casing, is blocked.
3. Diesel engine works under abnormal conditions, such as excessive load fluctuations, emergency shutdown.

Exclude
1. Clean the air leak cleaner, intercooler, intake pipe and other related parts.
2. Clean the turbine components.
3. Prevent abnormal working conditions during use, and operate according to operating procedures.
4. The turbocharger has a low speed.

Causes of failure
1. Due to serious oil leakage, oil glue or carbon deposits accumulate and hinder the rotation of the turbine rotor.
2. The phenomenon of magnetic rubbing or damage caused by the rotating air is mainly due to the severe wear of the bearing or the operation under over-speed and over-temperature, which causes the rotor to be deformed and damaged.
3. Bearing burnout due to the following reasons:
A. Insufficient oil inlet pressure and poor lubrication;
B. Engine oil temperature is too high;
C. Engine oil is not clean;
D. Rotor dynamic balance is destroyed;
E. Assembly clearance does not meet the requirements Requirements;
F. Improper use and operation.

Remedy
1. Carry out cleaning.
2. Perform disassembly and inspection, and replace the rotor if necessary.
3. Find out the cause, eliminate hidden dangers, and replace with a new floating sleeve.
4. The supercharger makes an abnormal sound.

cause of issue
1. The gap between the rotor impeller and the casing is too small, causing magnetic rubbing.
2. The floating sleeve or thrust plate is severely worn, and the rotor has too much movement, which causes magnetic rubbing between the impeller and the casing.
3. The impeller is deformed or the shaft journal is eccentrically worn, causing the rotor balance to be damaged.
4. Severe carbon deposits in the turbine, or foreign matter falling into the turbocharger.
5. The compressor surge can also produce abnormal noise.